Towards the end of my stay, I spent two evenings visiting the neighboring lighthouse of Korakas by foot (see my last post for a map). The lighthouse was installed on a protruding cliff. Volunteers use it as a post for spotting refugee boats, that they then report to Sea Watch / CADUS and the other SAR groups (in this area mainly Pro Activa Open Arms and the Boat Refugee Foundation). At the same time as it supports the refugees, the lighthouse also attracts refugee boats into the cliffs. As, on EU request, Turkey tightened controls and attacked refugee boats, the boats shifted from daylight to nighttime, making the journey more dangerous. To avoid them crashing and drowning, the volunteers installed floodlights, that can be run on an emergency generator, and life saving equipment at the beach. Once the people are on land, the CK team takes over and provides a first shelter and support in heated tents provided by MSF . The installations at the lighthouse mostly are made out of re-purposed refugee boat pieces. The floor boards and engine hoods provide for benches shelves, bridges, and pretty much anything else you can think of. The rubber hulls make for drainage canals in case of rain and general purpose covers. 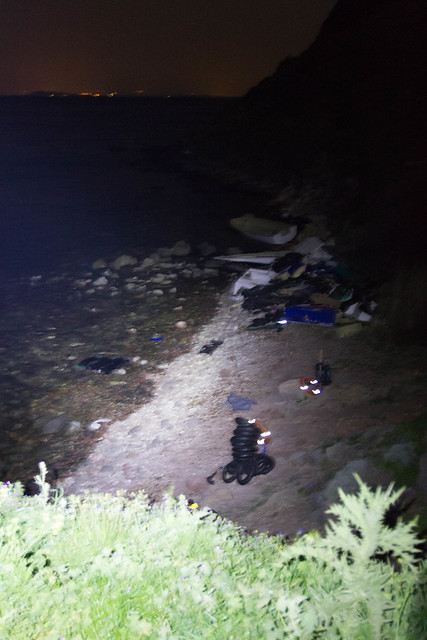 The east side beach at Korakas at night and Turkey in the background. 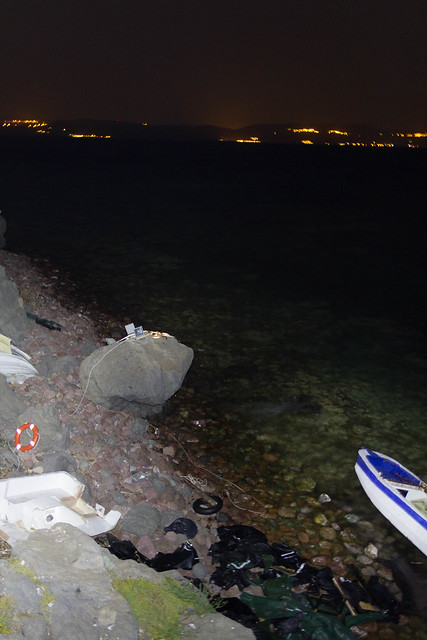 The direct view towards Turkey in the north. 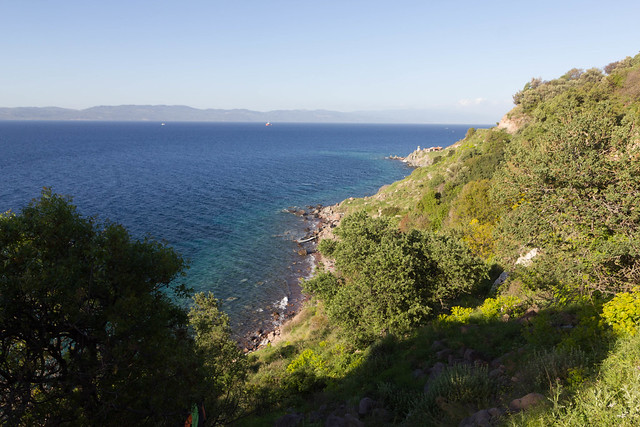 Coastline west of Korakas with Korakas at the end and Turkey in the background. 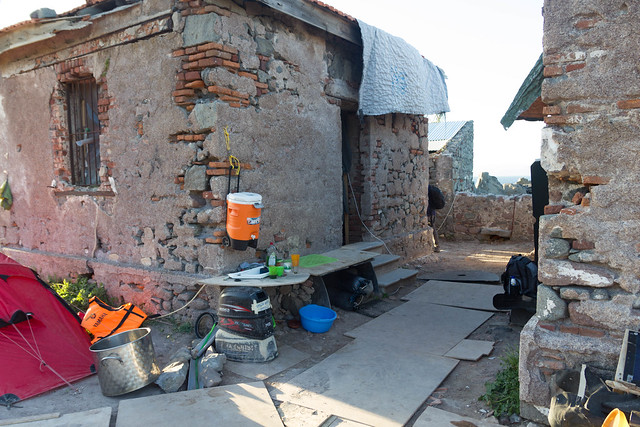 The main building (left) and the side building. 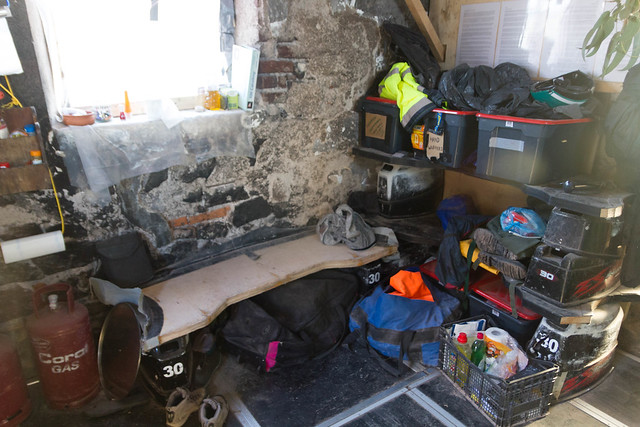 Inside the main building. 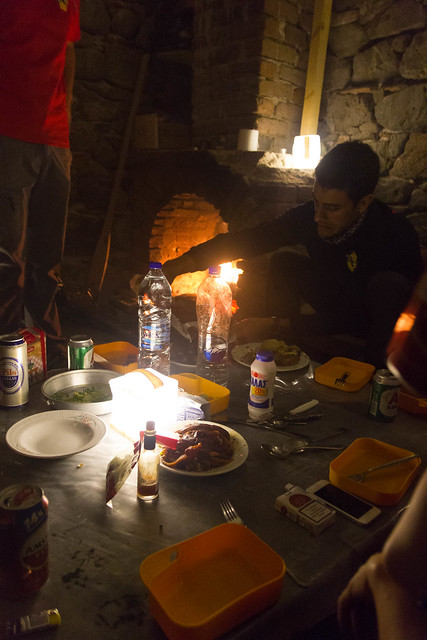 Dinner inside the side building. 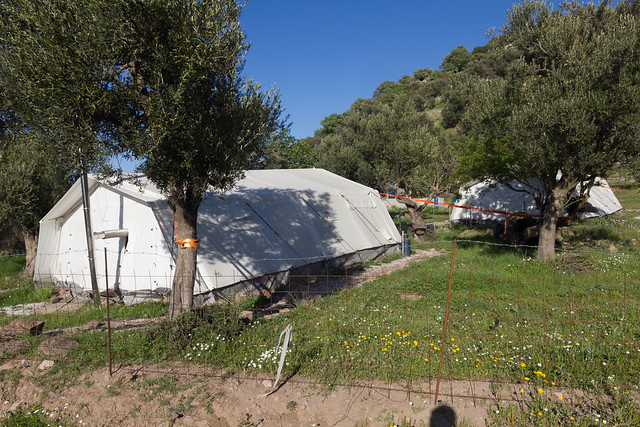 Heated tents — As far as I can recall, they are operated by the CK team and provided by MSF.

While I was visiting Korakas, the authorities were half-emptying the prison camp of Moria and prettyfying it for the visit of the pope. When we were watching the TV showing the pope in the prison camp, my friends noticed that the walls were freshly painted and we all witnessed the nice and clean clothing of the kids meeting the pope…
Despite all the fake niceness that was put up for the visit of the pope, I still feel that is good that he paid the visit to Lesbos and Moria and that he made it clear that the refugees actually are humans, and we should treat them the way we want to be treated. It also was a nice gesture that he took ten refugees with him to the Vatican. Ten more than several EU member countries are willing to accept.

On the occasion of the visit, there were some demonstrations, that were not appreciated by the Greek police. Our boat was not allowed within one mile of the coast in the Mytilini area, so they did a little photo shoot at the dying swan, a refugee boat that had hit the rocks near Palios with about 120 people a month earlier. All aid groups tried to get their share of the press attention to advertise their causes and activities. This also earned us a visit of one of the MOAS vessels, an impressive SAR ship. 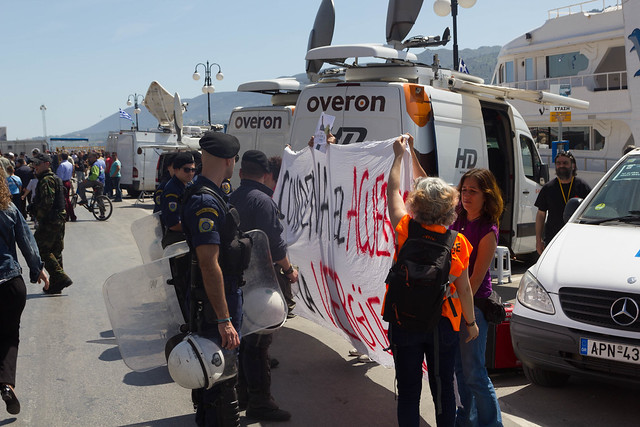 TV teams, protestors and police, most banners were taken down / confiscated by the police.

Protest banner on the dying swan, a boat that ran into the rocks next to Palios with more than 120 people on board a month earlier.


Parts of the rescue operation on the dying swan in March. 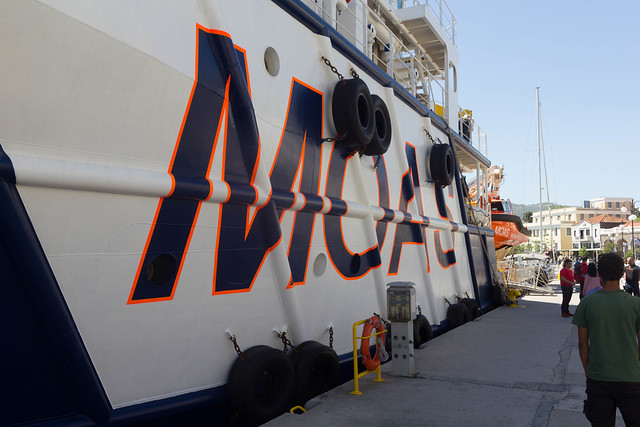 A few hours later I was on my plane from Greece back to Germany. When we had boarded the plane in Athens we were told that the boarding was now complete and we were free to spread out in the 2/3 empty plane. I chose an empty row and had the feeling that we could have taken a few refugees with us without suffering too much discomfort.

Empty seats on the flight from Athens to Munich. I would have happily shared my row with 5 refugees.

When I had eaten my second ration of dinner (thanks, Lufthansa!), I looked at our position and figured that I just had a very comfortable crossing of the Greek northern border. All those people that are prevented from crossing the border in Idomeni, those kept in the prison camps on Lesbos and the other islands, and those on the other side of the sea I had been observing in the last weeks can only dream of this easy way of traveling. I hope I will see many of them in the streets of Hamburg in the future. I’ll probably not recognize them, but I hope they’ll find their way. Maybe one day we’ll figure out that we won’t die if we let them in but many of them will die if we keep them out.