[Sorry, it took me for ever to write this post]

When I returned to Germany from the Americas, the number of refugees reaching our country from various war zones and other backgrounds was rising drastically. While there was not that much to do in Bremerhaven, where I was working during summer, the situation was very different in Hamburg.

With the refugees piling up in Budapest, Hungary, in the thousands (the official EU model for dealing with refugees is to leave the asylum processing to the countries on the perimeter of the EU), Angela Merkel for the first time in her office as chancellor actually took a real decision on anything, and, on September 4, 2015, declared that Germany would deviate from this model and accept refugees for asylum processing in Germany without prior processing in Hungary. [A nice German article summarizing the widely varying acceptance rates depending on country of origin and country of applying for asylum (the table is pretty self-explanatory)] 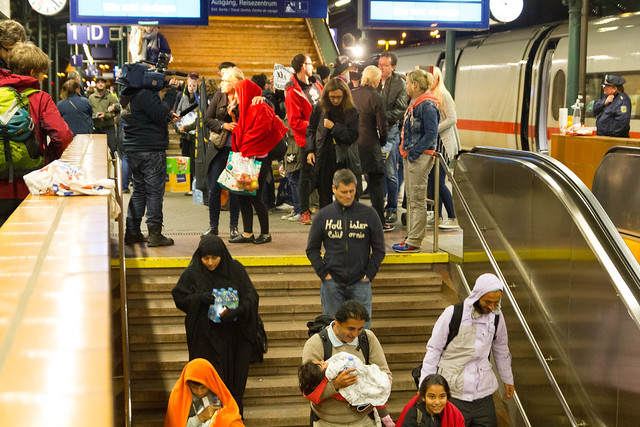 German authorities are reasonably well designed for dealing with business as usual in a very formal and correct manner but definitely not for adapting to a new situation and taking decisions fast. This in combination with — well let’s call them rather conservative — personnel in a lot of positions let to a massive failure of the authorities in providing the refugees with basic needs. A gap that was (partially) filled by an unprecedented volunteer action. People started collecting and distributing about anything from sanitary items via all kinds of clothing up to baby beds and toys. In Hamburg, the city allowed the volunteers to use one of the halls of the fair center for sorting and re-distributing the goods. This was the perfect location, as it was easily reachable by car and public transport making dropping goods of very easy. At the same time, the central location made it easy for volunteers to swing by for a couple of hours of sorting things. In the first weeks, several hundred people populated the fair center and sorted, and sorted, and sorted… 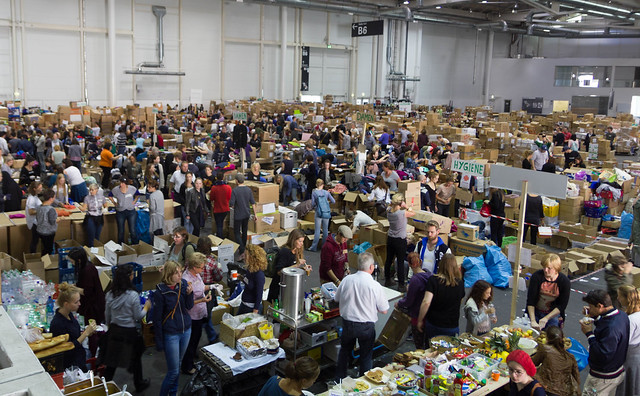 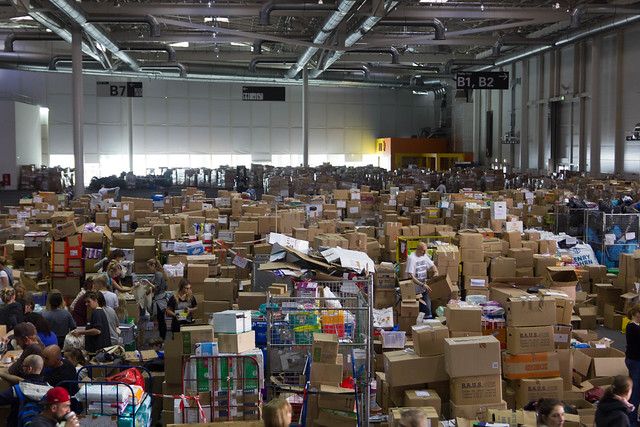 Some people made this activity their unpaid full time job and set up a whole computerized logistics chain. It was impressive to watch the sorting center evolve from a rather chaotic system at the start to a well-organized center with bar code labeled boxes, and managers for all the different classes of items within weeks. Every time I swung by, something, if not the whole place, had changed and become more professional. One of the people I met later started a little company that plans to build housing for refugees from truck trailers called RETREAT. Other volunteers went into the refugee camps and offered German language courses, entertainment programs for kids, joint sport events, or provided miscellaneous other forms of support.

[new paragraphs]
Other gaps were not so easy to fill. Deep into the cold season, many refugees in Hamburg had to live in moldy tents. They got replaced with wood cabins (27m² (290ft²) for 16 people) in late October, after problems and protests had gotten too massive. Others had (and still have) to stay in old supermarket buildings, school gyms, and pretty much anything the authorities can get reasonably cheaply, even the hangars of the old Berlin Airport in Tempelhof. Many of these places suffer from complete lack of privacy, undersized sanitarian installations and so on and so forth. Medical services also are not quite up to the usual standard. This is not something these people have to endure for days, this is for months (years?) without any clear perspective when it will end. Empty office buildings seem to be largely exempt from use for refugees. They remain untouched.

The asylum processing also is one of the areas where volunteers can’t bypass the slowness of the authorities. In some areas it takes several months (sometimes more than a year), till people get an appointment to officially file the application for asylum. Then there is the processing time of several months and then finally a decision. If somebody who already has been accepted for asylum wants to bring (usually) his family into Germany in the safe and legal way, this application can take another few (well, seemingly) years, and our government is planning to add another two years of wait-time for a part of the asylum seekers (I can’t really judge what fraction is affected, but it seems to be thousands of people). Not what you want to do if the lives of your family members are in danger. Basically this means that the whole family has to take the risk of the dangerous journey with robbers, rapists, and rubber boats (oh, wait, we are trying to close that option, too)… I found reading Wartime Lies by Louis Begley a good way of getting a feeling of what it might mean to have to flee and be considered illegal where you are.

After helping with sorting clothes by kind and size, I decided that there must be some kind of activity, where I could make a bit more use of the things I have learned so far. Climate modeling didn’t really seem to be the thing that the refugees needed, but there are a few other things I have learned in my life. One of them is driving boats. Floppy, a friend from Greenpeace, told me that he was going to go to the Greek island of Lesbos with a young NGO called Sea Watch, and that he was going to spend two weeks in December driving a rescue boat and plucking people from the Mediterranean Sea. As I was pretty busy during the winter, I decided to wait for his report and, around new years, I contacted Sea Watch and signed up for two weeks of search and rescue in April.

Well, as fast as the number of people reaching the EU jumped up during last summer, it also plummeted again early this year when most of Europe had jolted into the political right wing, and borders were closed with razor wire fences and police and military controls all over the place. Basically, it seemed like the whole EU was going to break apart because nobody wanted people fleeing from war in their country. Finally, the EU agreed to pay billions of Euros to Turkey, if they would accept back any refugees making their way from Turkey to Greece (the main route into the EU until then). This agreement became active just before I went to Lesbos.