When I first looked into my lonely planet section on Nicaragua, one of the more interesting places, I saw was Little Corn Island, some 50 miles off the Nicaraguan Caribbean Coast. Everybody who had been there told me to go, so Little Corn got its place on my inexistent itinerary. 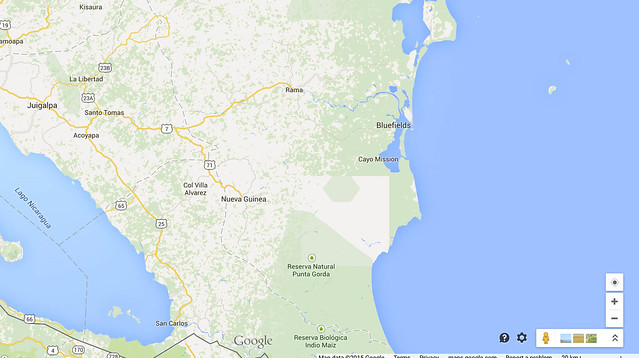 Map with the Corn Islands (the two little specks in the ocean). Map:Google.

My basic plan for my last two weeks was to puzzle my way from Ometepe to the island, and back to San Jose, my departure airport. The difficulty that was getting harder and harder to ignore was that the boats to the Corn Islands (there are two on a regular schedule) both leave Bluefields on Wednesday morning. With my most optimistic itinerary scheduling my arrival in Bluefields on Wednesday evening, I was in trouble. A little change of plans later, I was on a seven hour bus ride with Daniel and Jakob from San Carlos to El Rama. The bus company had a mission, and that was preaching the word of god to travelers. So, after a bit of religious music from tape, and a flat tire, we got to watch a dvd portraying the perlas de dios (or whatever that band was named), a three brother jesus-group. Another religious concert later, we finally made it to el Rama, waited an hour or so and took the speedboat to Bluefields. 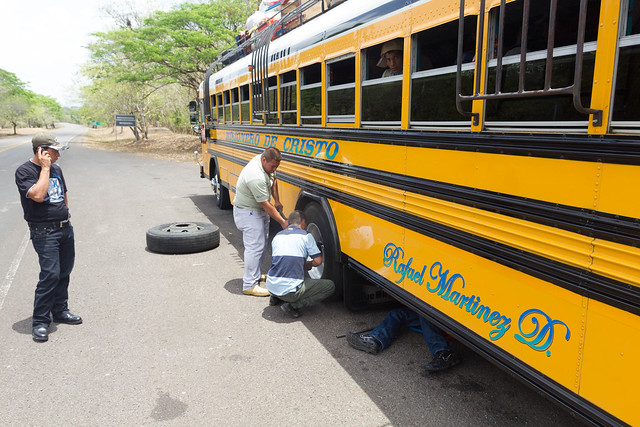 This bus was on a mission and could not be stopped by a flat tire. 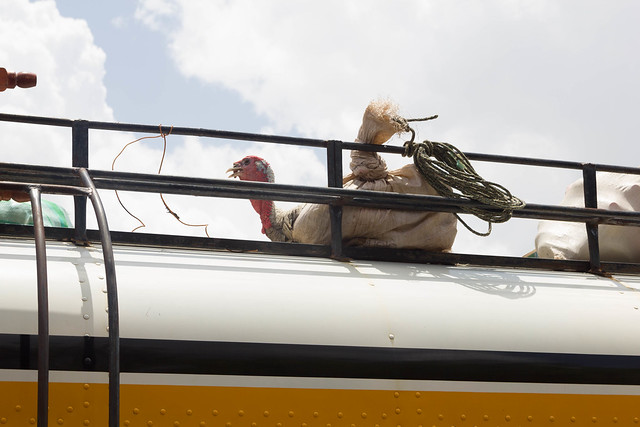 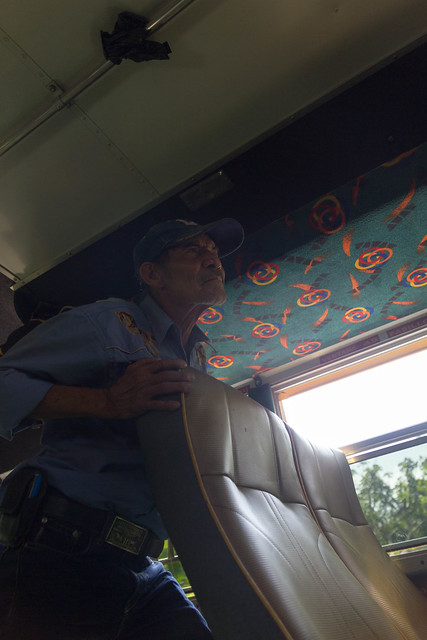 My neighbor in the bus. 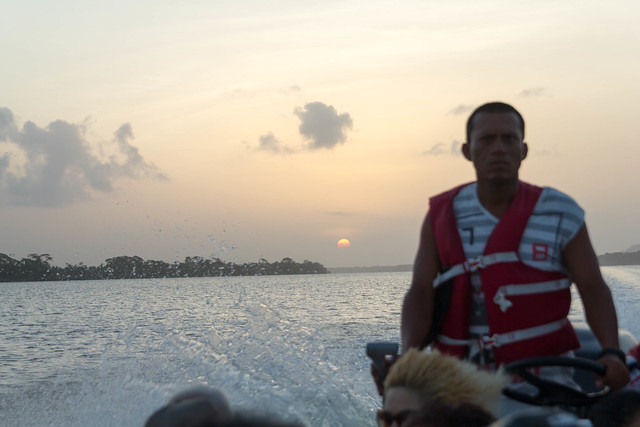 On the boat to Bluefields.

After a guy, who introduced him self as our friend and city guide on our arrival in the harbor, had shown us to a rather uninviting hotel in Bluefield’s harbor- and red light district, we made our way to the first hostel in the lonely planet and spent half the money for a reasonable room. Bluefields got hit by a hurricane a couple years ago and the architectural recovery yielded results that are of a beauty comparable to that of Mannheim or Muemmelmannsberg (albeit smaller).
In the morning, we bought the tickets for the ferry and the joy-ride to Big Corn started. New to the team was Misa, a Japanese gal that spends her life with working to raise money for trips and then traveling the world. She was the only one that handled the trip without getting motion sickness. I got to keep my breakfast but was not feeling too well. Other people were less lucky. Once on Big Corn, we had to decide between staying on the island or getting a small speed-boat to Little Corn. With motion sickness pills in the body we decided to make the dash over to the car-free paradise. 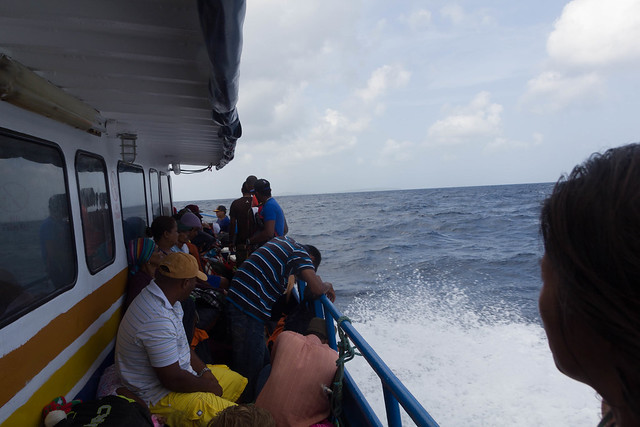 On the Ferry to big Corn.

Once on the island, the usual search for affordable, decent housing started and proved to be much more difficult than in other parts of Nicaragua. There is no hostel with dorms on the island. Indoor-camping only very modestly appealed to Misa and me, and the boys didn’t even have camping gear. We ended up at the Shell hostel, Misa and me camping and Jakob and Daniel sharing a room with a double bed. The boys left on the next morning for a better deal at Grace’s Cool Spot (it looks really nice, but there is neither a guest kitchen nor camping), while Misa and I stayed in our tents. 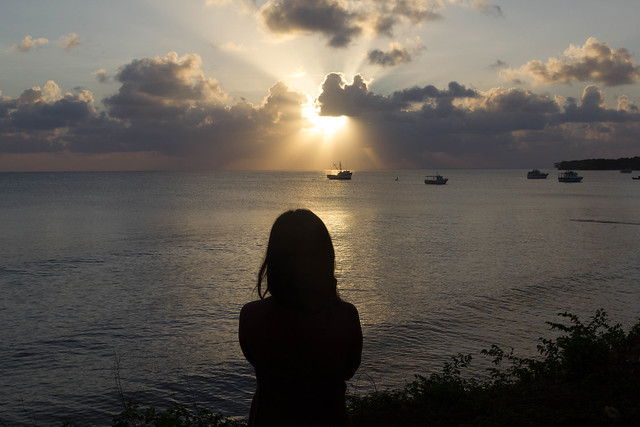 Shell Hostal (named after the conch shells that mark the way to the entrance) is an experience in its own. Gomez, the owner, is an elderly Nicaraguan. As any good Nica, he’s deeply religious and enriched my days here with commented bible passages in hard-to-understand Carribean-English. When he’s not telling from the bible he’s probably cursing the communists ruling Nicaragua, Cuba and Russia, and proclaiming that he’s going to fight in the next civil war to get rid of them. If you can’t find him at the hostel, there’s a good chance of finding him at the Oasis, the cheap bar on the island, where he’s likely to be flirting a bit while having one or another couple of beers.
He very much wanted us to conserve water and electricity to keep his bills low. This has the little disadvantage that the water coming out of the shower hardly is able to get the sand of your skin. I heard that complaining yields a temporarily wider-opened valve. Washing the dishes with almost dripping water is a similar joy. 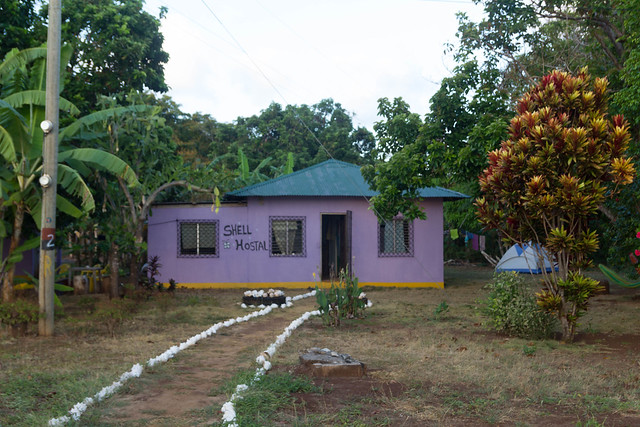 If you ever happen to need the tourist police on Little Corn, just go to the best place to hang out right now, and you can almost be certain they’ll be hanging out there. I saw them in a hammock on the beach at daytime, at a concert in the evening, …
If it’s night and/or no fun to be outside, just go to bed and try some other time. They’ll probably be unavailable. And yes, there sometimes are problems even on this little island.

Misa and I spent the first day at the north beach where I saw a nurse shark, an eagle ray one or two other rays and the usual bunch of other reef fish on snorkel trips. To add to the Mangos that we had picked up on the way to the beach, I harvested a coconut. There’s nothing better than a self-harvested coconut on a beautiful beach.


The Eagle Rays from Benjamin Smith on Vimeo. Ben is a great guy and a divemaster on a long trip around the world. Check his vimeo account for more beautiful videos.

The next day it was time go deeper and I had two beautiful dives with Dive Little Corn at Patch and Flor de Caña. We didn’t see the oh-so-present nurse sharks, but a whole range of other fish including a moray eel. Next day, next dive. This time the nurse sharks were already waiting to be petted when we descended into my place. When we were done on that, there was a big golden Stingray calling for our attention. I missed the green moray swimming through the sand field, but even without it, I saw way more creatures than I could remember. Several were brought to my attention by Inga, a German teacher and dive instructor on holidays. While we were disassembling the equipment, we teamed up for a night dive. So, be there at 5 PM. That left enough time for an afternoon on the north beach with Genevieve, who had just passed her open water certification. 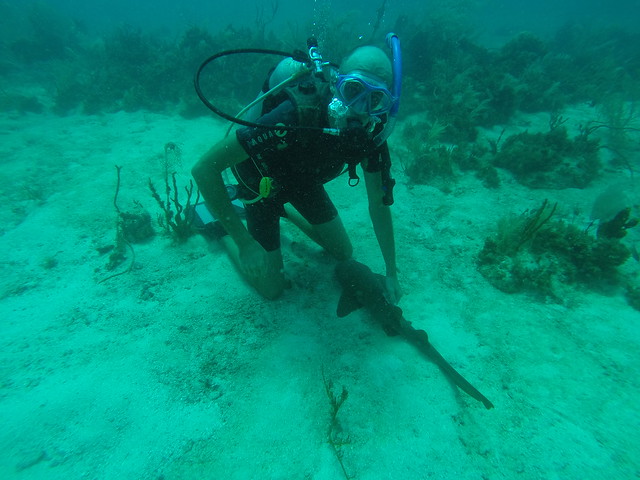 The night dive was amazing again. Did you know that turtles hide under corals for sleeping? Stingrays will take pretty much any bit of ocean floor for hanging out, or just lie in the middle of the corals. The remoras are nicely stacked in one sand patch next to the reef. Lobsters are watching from there little caves and the octopus is happily hunting and going through rapid color and shape changes. Inga pointed out the biggest puffer fish ever. I’d guesstimate it somewhere near 50 cm. Another highlight was the seafloor disco. Inga pointed out little crabs or other sand critters that yielded little flashes when we moved our hands through the water, and even when we didn’t. After 58 absolutely awesome minutes in the 28 C warm water, we froze our *** off on the way back to the shore. 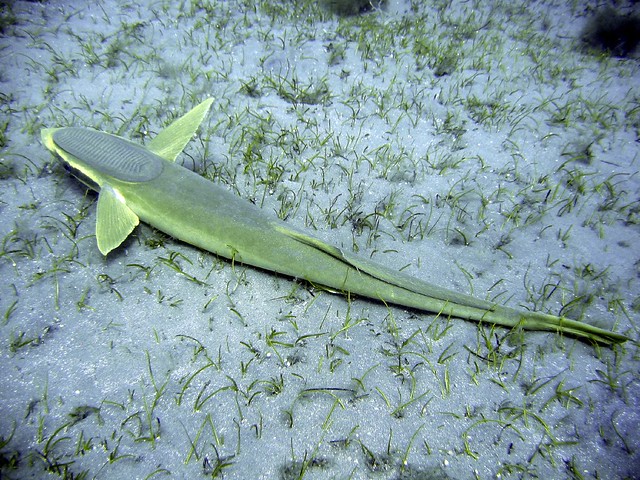 A remora in the sand off Egypt. Photo: Philip Wade (Flickr)

In their constant quest of outperforming themselves, dive little corn took us to Jarhead on the next morning. While I was decending, I was delighted to be heading strait into a big school of fish waiting just above the sea floor. Always fun to play a bit with the big meta-fish. It kind of looked like they were slightly nervous about something and when we looked around a bit more, we saw six dolphins that inspected this group of strange bubble-breathing fish that had just fallen from the big fish on the surface. Flooded with happiness from this encounter, the main part of the dive continued joyful with a drum fish and a flute fish adding to the formally musical side of the dive and fluorescent blueish corals delighting my eyes. Thanks to Jonas and Ben for taking photos and Videos and to Ben for turning them into this cut version.

While the early morning dive was fairly deep and therefore with about 40 minutes rather short, the lunch-dive at White Holes was on the shallow and long end of scuba trips. I missed the call to descend because I was admiring a giant school of Sergeant Major fish. I didn’t attempt to count but they were somewhere between the hundreds and the thousands and hanging out right below and abound our boat so I could watch them just snorkeling. Once in the reef, I found a green moray in one hole and a lobster peeking out of one of the others. With nurse sharks (not up for petting this time) and sting rays spread out over the sandy patches we got our dose of this family of animals. Later in the dive, an eagle ray said hello. Elk horn corals, grown over the centuries provided a beautiful background for observing all the reef fish in the bright daylight of this shallow site.

My last two dives brought me to Long Rock, where a big moray eel greeted us and to Sueños Cave, where we could dive below overhangs and through swim-throughs. This was a nice finish for my time on Little Corn.